Fail Forward: Gain Massive Momentum by Ditching the Plan and Diving in 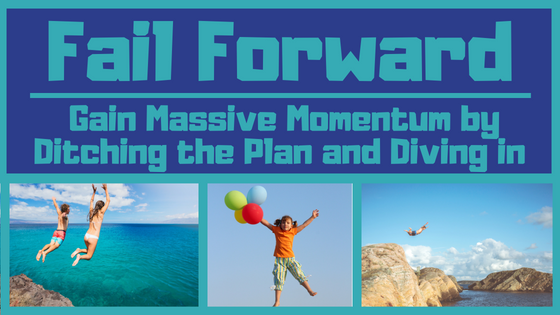 Learning from mistakes is the surest way to build momentum and crush a goal.

The above is sage wisdom I somehow missed as I meandered my way through life up until age 25. I often look back in frustration at that wasted time. How could I have been so naive!? How could I have missed so many obvious signs that I wasn’t reaching my full potential?

The truth is we will either strive forward or putz backwards. There is no middle ground. There is no status quo, only positive or negative momentum.

For most of my life I’ve had very little forward momentum. I’ve switched between states of confusion and clarity, but have remained mostly clouded about a good many things:

While 29 is admittedly far too young to be thinking about legacy, that’s me in a nutshell. I’ve gone from not thinking about life with any real depth to pondering my own mortality in the span of 4 short years.

What a mess I made of a lot of things. What a mess that I had to dig myself out of. Not a mess compared to many mind you, but we all look at our past with regret at times.

In high school I did well, but didn’t apply myself fully. I made a few close friends and then spent the rest of my free time in self-serving endeavors like video games or tennis.

If only my high school self saw me write a line like “self-serving endeavors.” What would I have said? I can’t honestly say, but I bet I’d think my future self a wackadoo. And goals? Pah! Goals were for preppies!

In college my girlfriend broke up with me and broke my heart, I accrued tons of college loan debt for a degree I didn’t have any desire to use, and I once again spent most of time playing video games and got fat in the process…

After college wasn’t any better. I actually had to borrow money from my roommate to pay the first rent bill in our new apartment. I hate thinking about that, but it’s where I was at the time. I was poor, without a plan, and overweight.

My then girlfriend now wife still loved me somehow, and for that I am forever in her debt. But I didn’t have a lot of respect for myself. I was floundering with no real plan for building a future. I was losing momentum and losing it quickly. I was falling backwards.

Luckily God had a plan for me. “Success seems to be connected with action. Successful people keep moving. They make mistakes, but they don’t quit.” -Conrad Hilton

The day I realized that I was missing out on my grander plan is firmly planted within my mind. I was at the global leadership summit (GLS) the summer after having turned 25. The GLS is a leadership conference that aims to encourage and empower leaders of all kinds to lead their business, churches, and organizations with the utmost care and attention.

I admit It doesn’t make for good storytelling, but I can’t give you a quote from that day that changed me. I only know that after I left my mindset was changed. Legacy mattered. My life mattered. What we do really matters…

Why had it taken so long to sink in? I wish I knew, but at 25 I was ready to go. I was ready to make a big difference in the world. I was ready to stop spending so much time worrying about my own wants and needs and ask how I could be part of a grander plan.

Do I know what that grander plan is?

Of course not… But I do feel so much more aligned with God’s heart for me than I ever did. I feel now as if I am getting closer to his purpose for me.

Miranda and I had a recent discussion that all of sudden led to us deciding on a mission statement for our lives! Pretty cool right?

In effort to model transparency, here is that mission in it’s current and unprocessed state:

“To empower individuals to pursue their God-given potential by reducing passivity!”

I’m excited for what the two of us can do together. I’m scared for how we are going to fail along the way, but that won’t stop us from moving towards a grander plan.

I wish I gotten started sooner, but all we can do is move forward, make mistakes, increase our momentum in the best direction we know, and keep on pushing. “You don’t learn to walk by following rules. You learn by doing and falling over.” – Richard Branson

I was finally ready to dive in. No longer would I be an “I’ll do it someday” kind of guy. I was ready to become a man of action and forge a life that mattered.

Holy cow it was hard. My momentum in most aspects of my life was stuck in mud running downhill. Just stopping the sludge was hard enough, but now I had to surge ahead!? It felt impossible. I didn’t know if I would make it.

Learning to get finances in order, losing weight, and setting goals was grueling and I failed often. But therein lies the secret. Failing breeds success, if for no other reason other than that you now know one thing not to do.

Failing fast and hard is the way to find success quickly and often. It’s not easy by any means, but it does get easier with time. Ease yourself into it with one small action step at a time and grow from there.

Ever heard of paralysis by analysis? It’s a killer whale in the goal achieving ocean. It strikes and drags you down under before you even have a chance to get a deep breath of air.

Spend time making goals and planning, but not so much time that all you do is plan! Take action and either find success or failure. If you succeed? Great! Keep on going. If you fail? Pick yourself up, dust off your shoes, and get back in the game.

Too often in my own life, and from stories I have heard of other people’s struggles, we let the fear of what could be dictate our actions. Should not the fear of inaction be just as strong, or stronger? Should we not be more afraid of what might happen if we do nothing?

Just as a baby learns to walk by falling over countless times, so too we must forsake deliberations and go for it. You’ll fall down on your butt often, but when you start walking the world opens up before you.

Stop planning to go on a diet “when the holidays are over” and make a healthy choice right now.

Take an action step for your new business venture and buy a website.

Throw caution to the wind and ask out that hottie that just started at your workplace.

You might fail to lose any weight, your website might never go live, and that hottie will probably turn you down. Failing is no reason to fear these things. Failure creates confidence and experience where planning cannot.

Stop fearing the myriad of ways things can go wrong and instead consider what would happen if things go right.

You could plan a thousand ways to achieve a desired outcome but you have no idea if it’s going to work. The truth is that more often than not, first attempts fail, and often fail hard. Second and third attempts will soon surpass even the most well thought out and detailed plan.

Take book launching for example. I am 10 times better at it than I used to be, and now I help other authors get it right on their first time through and forgo a lot of the mistakes I made. Even still, new authors make errors, and it’s only through those errors that they learn what to do and what not to do.

When I first launched my book my plan was all over the place. Now I am more capable of drilling down and focusing on the important aspects.

To much the same degree I am much better at eating healthy now than I ever was. It was a major learning curve to go through to the Whole30 program this summer but it was worth it. My wife and I are both losing weight, learning to cook more nutritious meals, and feel better overall.

The point is that too often we want to just talk about it and put our feelers out there when just doing things would be a far better venture.

Ask yourself what you could fail towards today and then get started. Don’t spend weeks making a plan, put your best foot forward and go for it.

You might just be surprised what you will find on the other end.

Becoming a Man (or Woman) of Action

Fast forward to today and I’m obsessed with goals. The new me is vastly different than the old. The old Jordan was content playing videos games every night for hours. I miss that old Jordan sometimes as contentment sometimes eludes me during these supposed “rest” activities, but this restlessness is good as it feeds my desire for growth.

I’ve seen the power of becoming a person of action and not one of mere deliberation and this has changed me throughly. Yet still, my modus operandi is to stop and question every decision. I constantly have to fight these battles. Fortunately I win more than I lose, but even just the decision of whether or not to do the dishes right away can be a struggle of epic proportions.

Conquer the part of you that says “wait a second I don’t feel like doing that” and run towards action. Deliberate when necessary “Hmm this 100 foot dive into rocky waters might kill me…” but only say no if there is an immediate danger or you know of an immediate better option.

Learn to take risks and dive headfirst into action. You won’t regret the massive progress you will start to see in your life and in the lives of those around you.

Revel in your failures as much as your victories because you know that failing is inevitable. You will fall down, you will get hurt, and you might just lose all hope, but know that momentum is found through continued commitment to the end goal by whatever means necessary.