The End of Jobs by Taylor Pearson: Book Summary and Highlights 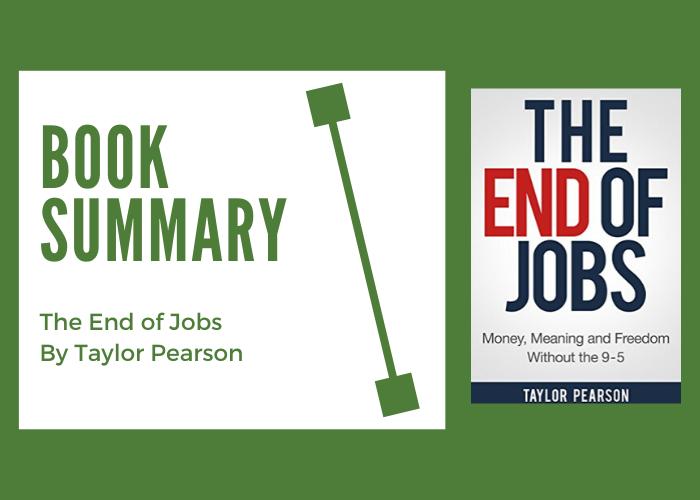 This one is a must read for the wannabe entrepreneur or freelancer.

Highlights from The End of Jobs by Taylor Pearson

Section 1: Have We Reached The End of Jobs?

Traditional university degrees— bachelor’s, master’s, and PhDs— have become abundant, making them less valuable than ever.

Lessons on Globalization from an Evil Genius

Regardless of how you feel about the fairness of these practices, they are very real and the effects they have on your life will be just as real. If your job is unfairly and unjustly moved overseas, it’s still gone. It’s more effective to accept this reality and work to improve it than to bemoan it from the sidelines.

Section 2: Why Are We at the End of Jobs?

More than half of America’s recent college graduates are either unemployed or working in a job that doesn’t require a bachelor’s degree. In 2014, the overall employment rate for law school graduates fell for the sixth consecutive year. It would appear that knowledge is no longer the scarce resource it was one hundred years ago.

He chose to quit his job to run an eCommerce store, not because he thought it would be more profitable, but for the same reason many people in his position do: he wanted to build a lifestyle that would let him spend more time travelling and be with his family.

Vast, man-made empires have been toppled by a single event—the storming of the Bastille, the signing of The Declaration of Independence. These individual events are what change looks like in Extremistan.

The wealth gap is increasing. There were fewer wars in the 20th century than any preceding century, but significantly more people were killed in those wars than in previous ones. Those are symptoms of living in Extremistan.

“A turkey is fed for a thousand days by a butcher; every day confirms to its staff of analysts that butchers love turkeys ‘with increased statistical confidence.’ The butcher will keep feeding the turkey until a few days before Thanksgiving…[The] turkey will have a revision of belief—right when its confidence in the statement that the butcher loves turkeys is maximal and ‘it is very quiet’ and soothingly predictable in the life of the turkey.”​—​N.N. Taleb

These are also silent risks. If he loses his job as an accountant, he hasn’t built up a skillset around building systems as opposed to operating within existing systems—he’s used to following orders, which dramatically reduces the options available to him.

The rules and the leverage points have changed in ways that were never made clear to us growing up. Many people are entering Thanksgiving week.

In a world where distribution is controlled by record stores and the costs of holding inventory are non-trivial, there’s a cutoff point where it stops making sense for the record stores to stock shelves with your CD. A record store has to pay for more shelf space, so if a record doesn’t sell a certain number of copies, then they can’t afford to stock your CD.

Exactly the same for books and the rise of self publishing

Credentialism emerged as the path to invest in knowledge over the course of the twentieth century. It was a social script, a clear path that many of us have followed: go to school, get good grades and extracurriculars, go to college, get a degree, apply for jobs. To someone sitting around in 1900, that wasn’t a clear script, but now it is.

Now you can dip your toes in the water and gradually wade into entrepreneurship. You can start investing nights and weekends working on step one products. A few of these successful products got Rob to full-time on his business, even with a mortgage and a family to support.36

Section 5: Entrepreneurship Is More Profitable than Ever

Henry Ford discovered that by giving his workers a raise to $5 a day, he was able to dramatically reduce turnover and increase output at his factories.45 For most of the 20th century, this trend continued. Workers in jobs continued to earn more and produce more. The promise of the Industrial Revolution was being fulfilled.

It illustrates a simple lesson: As humans, we love to work but dislike the obligation of it—the job-based paradigm.

past few decades, as well as historical examples, it generally comes down to three core motivators: money, freedom, and meaning.

John Rockefeller, Andrew Carnegie, Warren Buffett, and Bill Gates were more interested in philanthropy and freedom to spend time with their families and pursue hobbies than making more money after they’d amassed a Scrooge-McDuck-worthy pool of money.

Years later, after selling his company and buying his own Lamborghini, MJ authored The Millionaire Fastlane, where he breaks down two primary financial roadmaps to wealth. The slow lane in the form of jobs, a path that most people raised in our society see. The fast lane, entrepreneurship, the path most people don’t see and one that’s becoming easier, safer, and more profitable.

This is essential because time is the only truly limited resource in the universe.

The first essential element to understand here is that of the unlimited upside. In a job, your upside is always limited. But look at The Portable Bar Company again (the business I worked with that sold portable bars). Over the course of 18 months, just a year and a half, the business grew by 527%. Most self-funded startups, entrepreneurs, and businesses I work with and talk with are disappointed by 20% annual growth in the business, while most people with jobs I know are grateful to get their 3% annual cost of living raise.

Both of these phenomena support exactly what we keep seeing: the scarce resource is entrepreneurship and individuals with money and capital have realized this, and are willing to invest far more in entrepreneurs and what they create, than in employees.

In a world of vast possibilities, we focus all our attention on a relatively tiny portion because the most powerful people are structuring the consciousness of everyone else.

Regardless of what is fair or just, what the protesters are missing is that we, today, our generation, have more opportunities not to ask for power, but to wrest it from the structures that exist.

Companies like AirBnB didn’t ask for power from Hilton—they leveraged the technology and the internet to take it. This happens on much smaller scales as well.

Instead of choosing from a set of available options, we can create our own. It’s the triumph of design over choice. Instead of ordering from the menu, we are more empowered than any prior generation to become the cooks.

In much the same way that the average middle class individual today is freer than John D. Rockefeller was a century ago, a self-described middle-of-the-road entrepreneur is freer to actually do Philosophy than a tenured Philosophy professor and create a bigger impact in the process.

Great work—the kind of work that will create wealth in our lives and the lives of others is not the product of obligation—is the product of freedom. Freedom gives us a longer lever, a better leverage point.

A person who is chasing consciously chosen goals can’t help but grow into a deeper, more complex individual. It’s in stretching skills, reaching up for higher challenges, that we become increasingly complex and more capable individuals and, consequently, more valuable to the marketplace.

A study which looked at the work of 11,000 industrial scientists and engineers working in U.S.-based companies confirms the urge to master something new and engaging was the best predictor of productivity. Scientists motivated by an intrinsic desire filed significantly more patents than those whose main motivation was money, even if we control for the amount of effort each group put in.57

Work has always been a disutility because the work that was required to accumulate more wealth and address the economic limit was primarily simple, algorithmic or at best, complicated work. If you’re a farmer and you were trying to get a job in the city one hundred years ago, you were probably going to end up in a factory. That was the opportunity available. The barriers to starting your own business were far higher than they are today.

However, the second group, the group that understood the purpose behind their work, raised twice as much money.62 The biggest problem we’re dealing with today is the underutilization of individuals. The most talented and ambitious young people, when they feel under-utilized in the jobs, shrink to fit their position.

While many feel destined for something more, something bigger, few of us have taken actions to seize it. We are optimistic, but unwilling to define for ourselves what that optimism looks like.

Yet, a certain group, entrepreneurs, are beset, overwhelmed by opportunity. While these changes make it more competitive and less profitable than ever to find a job where you can take orders and rest safely at night knowing nothing dramatic is about to happen, they make it possible for the first time to seize a level of wealth, freedom, and meaning without precedent in human history.

Entrepreneurship expands your power to design your life.

It feels really important to answer all my emails right now; someone is waiting on it! It feels important to read all those Buzzfeed articles popping up on Facebook. But what if, instead of answering the email or reading those articles, you spent an hour every day working on that project you’ve been thinking about? Writing a book; launching a product on the side to begin stair stepping; looking for an apprenticeship with a company you admire; building a business that you could tell your grandchildren about.

My Short Review and Summary

Huge fan of this book by Taylor Pearson. The writing style left me wanting more, the sentence structure was weird at times, and he definitely added a ton of fluff toward the end. YET, I can’t help but love this book.

Taylor puts words and research to a lot of the thoughts and feelings I have about how the world is changing. I found myself nodding, laughing, and otherwise thrilled to have a found a book that lays it out so cleanly.

Entrepreneurship isn’t risky business. In fact, Taylor provides convincing evidence that it’s MUCH riskier to stay at a normal job. He goes line by line and even shares the history of jobs and how things were, compared to how they are now. I usually start nodding off whenever history works its way into a book, but I didn’t mind it at all here.

The End of Jobs is an absolute must read for anyone who feels like things are changing in the world economy, but needs it defined for them.

Get The End of Jobs on Amazon